I know, I know – it’s been far to long since I’ve posted, but don’t fret, I’m still alive! It’s just been a crazy few weeks…

In the last few months I’ve returned to the United States after more than 7 months abroad, I moved to a new apartment in the awesome Greenpoint neighborhood of Brooklyn and I started my senior year of colleges. It’s been quite the adventure these last 2 months settling into a new place, a new routine, a new life. So in the spirit of this new life, I am working on a new banner with my roommate and I am planning on posting a lot more in the future!! I promise! In fact, I already have many posts a brewin’ in my head, especially as the leaves turn and my favorite ingredient – PUMPKIN! – is starting to hit the shelves!

So to start things off, here are some cupcakes that I made a few weeks ago. 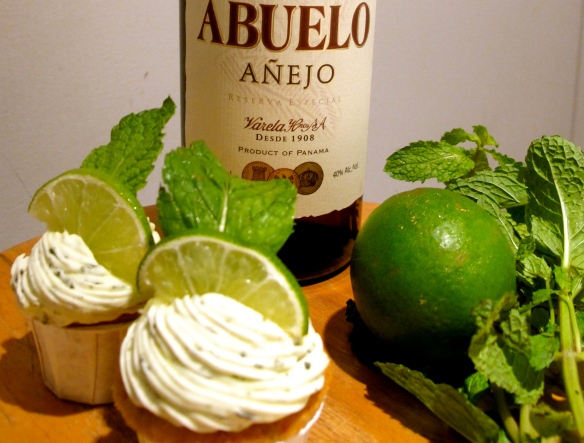 It was my friends 21st birthday, and in the spirit of all things alcoholic, I made some mojito cupcakes! I think I’m going to start adding alcohol to everything I made now as the addition of rum made these super tasty. Now all my roommates and I are big fans of mojito’s. So much so that when we walk into a party, we bring everything that is needed to make them – rum, limes, mint and sugar! We are walking bar. The cupcakes and the frosting both had copious amounts of rum and lime and I added some crushed mint to the frosting to give it the classic mojito taste.

1) Combine the buttermilk and the ½ cup mint leaves in a small saucepan over medium heat. Warm until just starting to steam (do not simmer), then remove from the heat and cover. Let steep for 15 to 30 minutes. Once finished, strain the milk into a bowl using a fine mesh sieve. The milk may appear curdled or clumpy, but don’t worry, it will come back together. Press on any milk solids and mint leaves to extract all the liquid possible. Give the milk a quick stir to smooth it out and set aside.

2) While the mint is steeping in the milk, preheat the oven to 325 degrees F. Line a standard muffin tin with paper liners; set aside.

3) In a medium bowl, whisk together the flour, baking powder and salt; set aside.

4) In an electric mixer on medium-high speed, beat the butter and sugar together until pale, light, and fluffy (about 5 minutes).

5) Reduce the mixer speed to medium and add the eggs one at at time, mixing thoroughly after each addition.

6)  Scrape the sides of the bowl and add the lime zest, lime juice, vanilla extract and rum. Mix until combined. (The mixture may start to look curdled at this point, but don’t worry, it will all come back together, power on!)

7) Reduce the mixer speed low. Add the dry ingredients in three batches, alternating with the buttermilk in two batches. Mix only until just incorporated, using a rubber spatula to give it one last mix by hand.

8) Divide the batter between the muffin cups. Bake for approximately 25 minutes or until just slightly golden and a skewer shows only moist crumbs attached, rotating the pan at the halfway point.

10) Allow cupcakes to cool for 5 to 10 minutes and then remove to a cooling rack. B

11) To make the frosting, whip the butter on medium-high speed of an electric mixer using the whisk attachment for 5 minutes. Reduce the speed to medium-low and gradually add the powdered sugar, mixing and scraping the sides of the bowl until all is incorporated. Give it a mix on medium speed for about 30 seconds.

12) Add the lime juice, rum and mint and mix on medium-high speed until incorporated and fluffy. If the frosting appears a bit too soft, add some additional sugar, one spoonful at a time until desired consistency is reached.

13) Frost cupcakes and garnish with a lime wedge and sprig of fresh mint.